Well, it’s a game where you are endorsed to capture, train and battle the virtual Pokémon’s which appear thru the real world. The game uses the GPS and camera of the device in which you play. Even though the game is free for you to play, you can do in app-purchase of the additional gameplay items shown.

How to Play Pokémon Go?

The first time you open the game, you get to make your own avatar. When the avatar is done, it is revealed at your current position with a map of your instant surrounding. The map contains some Poke shops and Pokémon gyms with some historical markers, monuments etc. After that, the avatar in the game moves as you move in the real world. You are able to catch different Pokémon’s once you start searching for them in different places of the world. For example, you can catch water type Pokémon by moving near the river or pond. When you encounter a Pokémon, you can view it either in augmented reality (AR) mode or with pre-rendered background.

Personally, I prefer AR mode because it’s more realistic. As you travel in search of different types of Pokémon’s for the completion of your Pokédex (a special type of Pokémon encyclopedia) you get to battle or capture different types of Pokémon. Unlike in other Pokémon games you don’t have to battle and lower the HP (Health point) of a Pokémon. To catch a Pokémon, just throw a poke ball at it. Well, the success rate of capturing the Pokémon depends upon the right timing and the type of poke ball used. After you capture a Pokémon you get two types of in game currencies which can be used to raise the combat power of Pokémon or to evolve them.

You get to challenge the gym and join one of the three teams after you are at level five. As you earn experience from in-game accomplishments your level will rise. You can deposit the captured Pokémon at the professor’s and make room for other Pokémon’s and you even earn a candy which is most for evolving a Pokémon or to level up a Pokémon.

What’s a Pokémon Go plus?

A Pokémon Go plus is a low energy Bluetooth wearable device that allows you to navigate the game map without looking at your playing device. It is for the comfort of player because it vibrates when you get near to a Poke shops and you can press a button to catch the Pokémon. But you can’t see the progress or the Pokémon you have caught unless you are connected to your playing device. 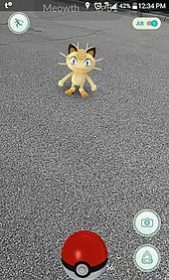 Tip from experienced one

From personal experience, I would like to inform you all that, don’t play the game in city, traffic or crowded area. If you do, then god’s help you all. For more Pokemon Go tips visit here.